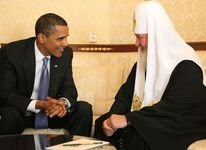 Moscow, July 8, Interfax - Dialogue between the Christian populations of Russia and the United States is important for the development of relations between the two countries, Patriarch Kirill of Moscow and All Russia said at a meeting with U.S. President Barack Obama in Moscow on Tuesday.
"The fact that the American and Russian people have preserved their common, Christian, system of values is increasingly important. We are the most religious countries, and it is crucial to maintain dialogue between our countries' Christians because our people need to be friends," Patriarch Kirill said.
"It is necessary to appeal to the hearts of the people in order to stem anti-American sentiments in Russia, and anti-Russian sentiments in America," he said.
Russian missionaries brought the Christian faith to the American continent, he added.
Read it all here.
Posted by Alice C. Linsley at 3:09 PM