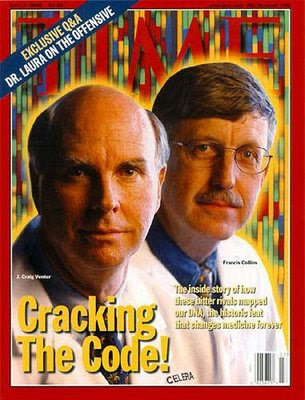 "The New York Times recently warned its readers about a wacky scientist in the Obama administration. But the fish wrap of record let the real nut job off the hook.

Reporting last week on the president's choice to head the National Institutes of Health, Times writer Gardiner Harris noted that praise for Dr. Francis S. Collins "was not universal or entirely enthusiastic." The geneticist is causing "unease," according to the Times, because of "his very public embrace of religion." Stomachs are apparently churning over a book Collins wrote describing his conversion to Christianity.

It's called -- gasp! -- The Language of God. Harris intoned: "Religion and genetic research have long had a fraught relationship, and some in the field complain about what they see as Dr. Collins' evangelism." And...that's it. Yes, the mere profession of Collins' faith is enough to warrant red flags and ominous declamations. A quarter of all Americans identify themselves as evangelical Christians and "publicly embrace their religion." But to the Times, Collins' open affiliation with 60 million American believers in Christ is headline news.

The rationality police in the newsroom have not, however, seen fit to print the rantings of a radical secular evangelist now serving as the White House "science czar." John Holdren, Obama's director of the White House Office of Science and Technology Policy and co-chair of the President's Council of Advisors on Science and Technology, co-authored the innocuously titled Ecoscience in the 1970s with population control extremists Paul and Anne Ehrlich.

Read all of Michelle Malkin's column here. And you don't want to miss this piece!
Posted by Alice C. Linsley at 5:40 AM