When a Riot Becomes a Revolution 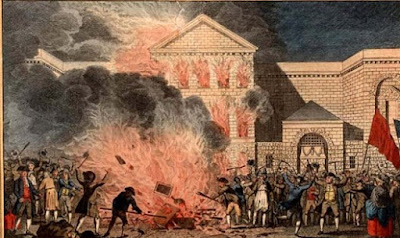 Newgate Prison in London burned by rioters in 1780.

John H. Plumb was the European Advisory Editor for Horizon. This excerpt is from one of his essays. The essay appeared in the Autumn 1968 issue of Horizon. It is a timely reminder of some important history.

When Does a Riot Become a Revolution?

The senate house in flames; mobs roaring and rioting in the Forum, full of hate, hungry for blood - off they went looting and pillaging. Confronted by the rival gangs, they fought and killed even in the Sacra Via itself, not once, but year after year as the Roman Republic crumbled. And the empire of Augustus only brought an uneasy peace. Social welfare, free food, and free fun kept the excesses down, but it required little - rumor, bribes, stirring oratory - to bring the mobs back into the streets.

When the capital of empire moved to the east, the mob was not lost. At Byzantium it rioted with equal violence, played on by oligarchs and factions in politics and religion. For centuries the mob rose and destroyed, tearing down buildings, pillaging, burning, and howling as it went.

In the summer of 1780, London erupted. By June 7, the city was a sea of flames; the prisons were broken open; the breweries were looted, and the gutters flowed with beer. Roman Catholic chapels and households were first desecrated, then wrecked, and finally burned. Among the rioters at least 285 were shot dead, 173 wounded, and 450 taken prisoner. These, the famous Gordon Riots, were unusual only in their extent. There had been wild rioting, burning, and looting in the 1760's and 70's, in 1733, 1736, and 1753 London had been at the mercy of mobs, as it had been time and time again during the previous century.

Not only in London but in towns throughout the kingdom generations of Englishmen had to learn to live with riots as they did with disease or death. It became a part of the nature of society. Nor was rioting an Englishman's vice; across the Channel they were just as violent. Inn the 1620's, 30's, and 40's France erupted in bloody riots that, in Normandy, finally turned into a peasants' war. For the rest of the century scarcely a year passed without mobs coming out in the streets of some provincial town or of Paris itself. They wreaked their vengeance on those whom they thought responsible for their misery.

The French Revolution changed the nature of European riots quite fundamentally. The mobs began to acquire more than a directing intelligence (they had rarely been without that) and to fall under the leadership of political strategists bent on using them for long-term ideological ends. Gradually the dispossessed and the frustrated acquired a deeper, a more ruthless, sense of identity, which encompassed violence, tragedy, pain, and even death for the sake of the future. And so the riot became an instrument of revolution. The European towns and countryside became even more violent in the nineteenth century; and England did, too - at least until 1850.

Things got better toward the end of the nineteenth century. Baron Haussmann drove his great boulevards through the riotous heart of Paris, providing excellent vistas for the rifle and, later, the machine gun and the tank. The weapons at the command of authority outdistanced the capacity of the mob to retaliate once the issue was joined.  It was not until the 1920's and 30's that the riot was resuscitated by the paramilitary formation of the Fascists, the Nazis, and the Action Française on the one hand, and the Communist Party on the other. The military fanatics having been crushed, riots declined in Europe into protest that teetered along the border of violence but rarely broke into it.

Last spring Europe again burst into flames, with student riots from Colchester to Cracow. Although these riots were usually provoked by academic situations, they are being exploited by acute political leaders. The students have become a type of false proletariat (a California professor has written “a student is a nigger”), and they are exploited as such. Attempts have been made – and with some success this past spring in France – to harness student idealism to the political programs of the working class. These recent riots in Europe belong to the tradition of both radical socialism and anarchism, but they are different in dimension from most American student riots and totally different in kind from the Negro rioting that America is experiencing.

The American riot is, as it were, the grandchild of the classical riot, which was bigger, more incoherent, more desperate – a deeper convulsion in the bowels of society – than the recent disturbances in Europe. The present American experience is, more precisely, akin to the riots of prerevolutionary Europe, before the mobs became infiltrated with political agents and exploiters who turned the riot to social revolutionary ends. This stage may be beginning in America, however, and it could develop rapidly.

The classical riot was generally more than a sudden hysterical outburst of anguish and despair. While it lacked political leaders, it did not lack leadership. Usually there were journeymen, artisans, skilled craftsmen, modest yeoman farmers, who made up the hard core of the mob and led it to its targets. Their approach was often direct - to break open the granaries, to lower prices by threats of destruction, or to improve wages or even secure work.

But the root causes of most riots were economic and specific. They never aimed at overturning the structure of eighteenth-century society, any more than most rioting Negroes wished to overturn American capitalism and its social structure. The rioters were out to secure immediate benefits - economic, social, and local - not to start a revolution.

In England in the seventeenth century rioters tore down the hedges with which landowners had enclosed the peasants' common fields. In the eighteenth century they ripped up turnpike tollgates that taxed the movement of their goods. Riots worked more often than not. True, some rioters were caught, some hanged, some transported, some imprisoned; but the rioting mass escaped scot free, often with loot, and many times they were successful in winning their immediate short-term aims. 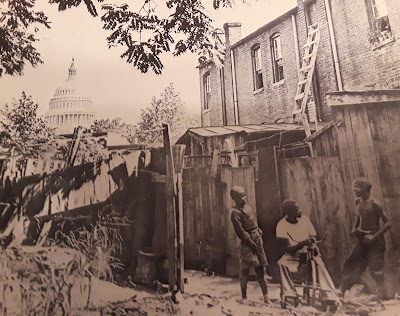 So far the American urban riot is working in the same way as it historic counterparts. "A little Easter shopping," said a Negro women going off with a coat in the Washington looting that followed the murder of Martin Luther King. And apart from immediate gains there are practical and psychological gains, too.

The practical gain is quite simple. Large physical losses of property scare owners into action. A urgent sense that something positive must be done for Negroes immediately follows riot. It is a sobering fact that, as in the past so in the present, riots rarely fail; the rioters always win - not in the long term, of course, but in the short term.

To the overwhelming majority of Americans, black or white, rich or poor, a fundamental change in social structure is just as unthinkable as it was to eighteenth-century Englishmen. But as long as the conditions that lead to violence continue, the riot with its emotional release and its material windfalls and illusory social gains will go on and on, hot summer after hot summer, as it did for centuries in Europe.