The Return of Stolen Antiquities 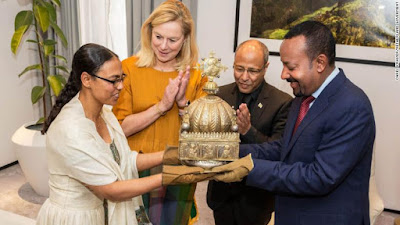 Antiquities are being returned to their place of origin more regularly than recognized. Many Western governments have pledged to return stolen artifacts that were taken during colonization.

In February 2020, The Dutch government returned a stolen 18th-century ceremonial crown to Ethiopia. The crown has great religious significance, and was kept safe for 21 years by Sirak Asfaw, a Dutch national of Ethiopian heritage.

Asfaw, who emigrated to the Netherlands in the late 1970s, said in a video recording that the crown "came into his hands" in 1998.

In November 2019, France returned a sword to Senegal as part of its commitment to return artifacts stolen during colonial times. The sword belonged to Omar Saidou Tall, a west African ruler and Islamic scholar who led an anti-colonial struggle against the French in the 1850s.


He eventually signed a peace treaty with France in 1860. According to French historian, Jean Suret-Canele, Omar Saidou Tall died from a gunpowder explosion in 1864. After his death, his sword and books from his library were seized by the French.

In October 2019, US authorities returned a stolen coffin to Egypt, two years after it was acquired by the Metropolitan Museum of Art for $4m (£3.2m) from a Parisian art dealer.