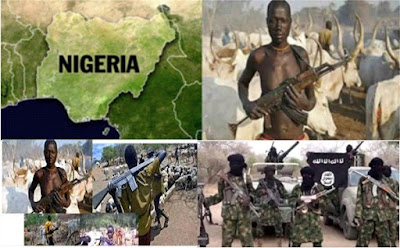 "What is happening in Plateau state and other select states in Nigeria is pure genocide and must be stopped immediately," said the Christian Association of Nigeria and church denominational heads in Plateau State in a press release last week.


The church leaders said that "over 6,000 persons, mostly children, women and the aged have been maimed and killed in night raids by armed Fulani herdsmen," which is prompting their cry to the government of Nigeria "to stop this senseless and blood shedding in the land and avoid a state of complete anarchy where the people are forced to defend themselves.

The Nigerian government, under Fulani President Muhammadu Buhari, poses this as a clash between herders and farmers and promotes the  idea of establishing cattle ranches/colonies for Fulani on the ancestral farming lands of the attacked communities as the only solution to the problem.

"We are particularly worried at the widespread insecurity in the country where wanton attacks and killings by armed Fulani herdsmen, bandits and terrorists have been taking place on a daily basis in our communities unchallenged despite huge investments in the security agencies," they added, saying President Buhari has failed to bring attackers to justice.

They referenced several mass-scale attacks this year, including the slaughter of over 200 people, mostly Christians, at the end of June in raids carried out by the herdsmen on local area farmers near the city of Jos.

Although some international news media has sought to characterize the killings as a land conflict between community groups, the church leaders, along with major persecution watchdog groups such as Open Doors USA and International Christian Concern, have all said that Christians are being deliberately targete"How can it be a clash when one group is persistently attacking, killing, maiming, destroying; and the other group is persistently being killed, maimed and their places of worship destroyed? How can it be a clash when the herdsmen are hunting farmers in their own villages/communities and farmers are running for their lives?" the church leaders asked.