The Scourge of Human Traffiking 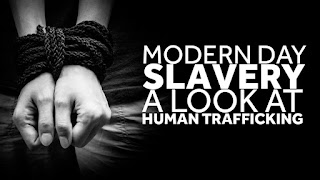 Written by an Ethics student at Midway University
Midway, Kentucky

Human trafficking in the United States can be reduced and possibly eliminated through education, awareness, and government intervention. Through these means, this illegal form of modern day slavery might finally be stopped.

The illegal trade and exploitation of human beings for forced labor, prostitution, and reproductive favors is termed human trafficking. Human trafficking is a transnational phenomenon and is second only to the international drug trade in relation to organized crime. By some estimates, it is a multi-billion dollar business affecting several million people in virtually every country across the globe. It is equated with a modern day version of slavery (US Department of State, 2011).

Human trafficking has reached epidemic proportions in the United States. The issue of human trafficking has many layers and is complex. Human traffickers can be individuals working for large trafficking networks such as the Chinese, Columbian, Mexican, Russian, Ukrainian, and the United States’ own cartels, or they can be small, one man, mom and pop operators or inner city pimps. A major challenge in human trafficking is data collection. If you cannot measure a problem, you cannot solve the problem. Most law enforcement officials and congressional leaders do not have accurate statistics reflecting the increase in demand trafficked victims. As a result, it is easier for them to sweep the problem under the rug, not lobby Congress for state and federal funding, and be free of the responsibility and accountability to the court of public opinion. Some government officials even claim the problem is vastly exaggerated or does not exist at all (Sarnoff, 2016).

Educating the public about human trafficking is essential to ending this modern day slavery. Everyone is needed to identify it where it hides and bring it to the attention of law enforcement. Misconceptions about human trafficking thwart efforts to stop the practice. One major misconception is the idea that only women can be its victims. Men can also become victims, especially of labor trafficking. Men often have a harder time identifying themselves as trafficking victims and they have access to fewer emergency resources, like safe houses, than women have. Another common misconception is that human trafficking is only sex trafficking. Labor trafficking and domestic servitude are major forms of trafficking. Generally, victims of human trafficking are subjected to force, fraud, or coercion for the purpose of sexual exploitation or forced labor. Identifying victims can be a challenge, especially for the public. However, some indicators that human trafficking is occurring include restricted or controlled communication; signs of fear, anxiety, depression, submission, tension and/or nervousness; not being in control of one's own identification documents; and performing odd tasks at odd hours. Working and living environments also tend to have very poor health and safety conditions, and often have peculiar security precautions such as bars on the windows or being surrounded by barbed wire. Many community members want to help end trafficking, but do not have the tools or resources to do so (Ortiz, 2011).

Awareness is the first step to preventing human trafficking and prosecuting the traffickers is therefore to recognize the complexity of the crime, which cannot be tackled in a vacuum. Anti-trafficking strategies have to be embedded in every policy area, from improving female education in source countries so that girls are less vulnerable to trafficking, to increasing police pay in destination countries so that officers are less susceptible to bribery (Dearnley, 2012).

Government intervention varies—while some countries are creating policies that work for their cultures, others are lagging behind with no counter-trafficking laws at all. There are also some international standards: In 2003, the United Nations Protocol to Prevent, Suppress, and Punish Trafficking in Persons established a universal trafficking definition and set a goal for countries to prevent and combat trafficking and assist victims. The United States Department of State’s Trafficking in Persons Report offers suggestions for nations to comply with the minimum standards for the elimination of trafficking. These efforts are challenging, however, as there is no one way to address the variations in trafficking across the world. Differing cultures, economics, and religions all make laws complicated to implement, and corruption, cultural interpretations, and different systems of justice make them even more difficult to enforce. Another thing that should be noted is that many of the laws worldwide focus on sex trafficking as opposed to labor trafficking (which is more widespread), partially because sex trafficking is talked about in the media more (Gulledge, 2015).

The Trafficking Victims Protection Act (TVPA) was authorized in 2000 and was the first federal law to address sex trafficking and labor trafficking in the United States. The TVPA focused on the prevention and protection for trafficking survivors, as well as prosecution for traffickers. The TVPA was reauthorized in 2003, 2005, and 2008 as the Trafficking Victim’s Protection Reauthorization Act (TVPRA), and each reauthorization offered positive changes. For example, the TVPRA of 2008 required the Department of Labor to publish a list of products produced by child labor or forced labor. However, the TVPRA expired in 2011, and is in need of an update to keep up with the rapidly evolving landscape of human trafficking. This year (2016), a bill to reauthorize the TVPRA has been reintroduced to Congress. It holds government contractors accountable for using foreign labor recruiters that use exploited labor, helps law enforcement prevent and prosecute sex tourism, and creates a grant-making program to prevent trafficking in humanitarian crises (such as in the case of Haiti or Syria). On the state level, while there has been vast improvement in some legislation, a few states have a long way to go. Massachusetts, rated one of the most improved states created a Human Trafficking Task Force, which strengthens protections for victims of trafficking and makes using the internet as a trafficking tool a punishable offense. On the other hand, there are states like Wyoming, where until January 29; no state law existed to punish traffickers. The just-passed House Bill 133 adds human trafficking legislation to the law books, and the bill will now go onto the Senate, which is a step in the right direction for the state (Jesionka, 2013).

In conclusion, Human Trafficking may seem too big to tackle, but for the thousands of people caught in this dangerous world, there is hope and ways people can help. Anyone can join the fight against human trafficking. Education, awareness, and government intervention are of utmost importance. Human trafficking awareness training is available for individuals, businesses, first responders, law enforcement, educators, and federal employees. Be a conscientious and informed consumer. Trafficking victims, including undocumented individuals are eligible for services and immigration assistance. Volunteer and support anti-trafficking efforts in your community.

Be well informed. Provide jobs, internships, skills training, and other opportunities to trafficking survivors. Several organizations are helping victims start new lives. The Living Water Center, which is a safe house and rehabilitation center for human trafficking victims. It also helps survivors graduate from high school and apply for college and/or job placement. Wellspring Living provides a safe house, education, and therapy for underage victims. It also offers independent living programs, which includes continued education and job skills training. 4 Sarah is an intervention program that reaches out to women working in strip clubs and informs them about the risks of the human trafficking industry. Learn the indicators of human trafficking so you can help identify a potential trafficking victim. People are talking, communities are rising, global networks are being forged, and governments are responding to the united message that human trafficking must end. Only with a concerted effort by governments, private companies, non-governmental organizations, and above all communities, can we hope to end the horror of human trafficking.