ISLAMABAD, April 19: Former president retired Gen Pervez Musharraf was finally arrested on Friday in judges’ detention case and was shifted to the Police Line Headquarters from his Chak Shahzad farmhouse. Interestingly, the former military dictator has been detained at a place which is opposite a graveyard where unidentified bodies of people killed during Lal Masjid operation had been buried. 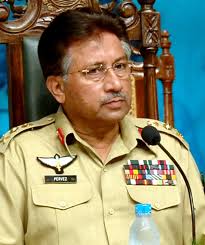 The general who is the first former army chief and head of state to be arrested has been kept at the Officers’ Mess and given the suite of Inspector General of Police. Sources said Gen Musharraf who was wearing a light brown Shalwar Kamiz looked depressed.

“He was not happy over the room given to him and his feelings were visible on his face,” they said, although policemen, including officers, were treating him as if he was still the country’s president.

The sources said the retired general had been assured that he would be shifted to his residence or a better place after some legal proceedings.