ISLAMABAD: The United States has revived its high-level engagement with Pakistan after keeping it suspended for almost a fortnight because of the impasse over immunity for its jailed staffer Raymond Davis.

Observers interpreted the resumption of contacts as an attempt by the US to tone down the rhetoric so that prospects for a settlement through blood money or some other ‘out of the box solution’ got a boost.

Pressure from extremist and rightwing political groups on the bereaved families for spurning any compensation offer, however, remains the sticking point, even though both sides have largely agreed to work together towards ending the ominous stalemate, according to sources.

The resumption of contacts was marked by the visit of a ‘junior’ US Congressional delegation, led by Senator Robert Corker, a member of the Senate committee on foreign relations. Other legislators in his delegation included members of the committees on armed services and budget.

Marc Grossman, the newly-appointed US Special Envoy for Afghanistan and Pakistan, would also be visiting Pakistan in the first week of next month. But, more importantly, the Americans have reaffirmed their commitment to deliver on the pledges for economic and security assistance.

The reset in Pak-US ties, which many had believed to have reached their nadir during the diplomatic spat over immunity for Davis, followed a visit to Islamabad last week by John Kerry, the influential chairman of the US Senate Foreign Relations Committee. Mr Kerry’s trip was described by both sides as a “relationship saving” mission instead of what was widely tipped as an attempt to save Davis.

Both sides, a top diplomatic source revealed, had during Senator Kerry’s visit agreed on the need for sending out feel-good messages to ensure a solution. “Public messaging has changed for the better and would become even better in coming days,” a Pakistani diplomat told Dawn.

Things now appear to be moving according to the step-by-step approach agreed between the two sides during Mr Kerry’s visit.

The Americans realise that some ‘out of the box’ solution would have to be found for an issue that had taken to its peak an already high anti-Americanism in Pakistan, the source said. “The government’s request for more time from the Lahore High Court to testify on Davis’s status is meant to buy more space for the US to settle the issue with the heirs of the victims.”

Another source at the delegation’s meeting with Prime Minister Gilani disclosed that the tone of American functionaries had changed greatly. 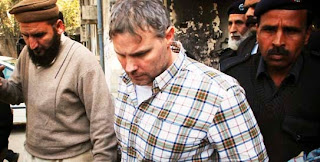 Mr Gilani, during an interaction with the American legislators, welcomed “the positive messaging emanating from both sides and emphasised that these should continue and go beyond the Davis incident in order to build upon the strategic partnership as well as the trust and confidence between the two countries”.

The prime minister expressed the hope that the US would remain focussed on shared objectives of defeating terrorists and extremists, besides restoration of peace and stability in Afghanistan.

While doing so, the premier stressed the US should not allow any irritant to distract them.

A common aspect of Congressmen’s meetings with both President Zardari and Prime Minister Gilani was that they discussed a wide range of issues, instead of focusing just on Davis. Moreover, there was a renewed acknowledgement of Pakistan’s sacrifices in the war on terror and the importance of cementing the strategic relationship – some of the components in relations that were lost in the vociferous debate over immunity for Davis.
THE SPOILERS: Although it looks very clear that after weeks of standoff, both countries are now seriously trying to defuse the situation, circles close to the government are wary of the posture taken by right wingers and militant groups.

Prime Minister Gilani, during Mr Kerry’s visit, had floated the idea of settling the dispute through blood money and efforts had been initiated in that direction. Right wing political groups and militant elements, sources say, are now creating hurdles by pressuring the bereaved families to insist on Davis’s trial and reject any compensation offer.

The Americans have also raised the matter at the highest level with the Pakistan government. The US embassy, in one of its latest communications, identified groups blocking the reparation effort and, according to one source, the Lashkar-i-Taiba is among them.