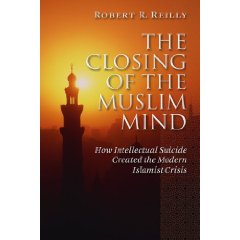 Robert R. Reilly has written an interesting book:  The Closing of the Muslim Mind:  How Intellectual Suicide Created the Modern Islamist.  The author does not approach the topic with a futilistic attitude. He does believe that dialogue is possible and that a revival is needed. As one commentator on his book has noted, "An Islamic world in which the Mu’tazilite view of the Qur'an held sway would be very different." The same could be said for Judaism and Christianity, were they to read Genesis apart from Rabbinic teaching, BTW.)
Here is a review of Reilly's book:

Muslim terrorism is a baffling phenomenon. How can indiscriminate slaughter of fellow human beings – Christians and Muslims, men, women and children – be justified in the name of God? As Osama bin Laden said shortly after 9/11 in one of his videos, “Terrorism is an obligation in Allah’s religion.” For many Muslims this is insane – not to mention his opponents in the West – so what gives Islamists moral legitimacy, at least in their own eyes?

It is vital for the West to diagnose this moral delirium. Three strategies are being used currently to cure it: exterminating the terrorists, promoting economic development, and integrating Muslim cultures into Western mores.

The disheartening message of Robert R. Reilly in his clear and concise book The Closing of the Muslim Mind is that none of these is likely to eradicate the infection. The terrorists’ fanaticism is so deeply embedded in the dominant interpretation of Muslim theology that it may take an intellectual earthquake to shake it loose.