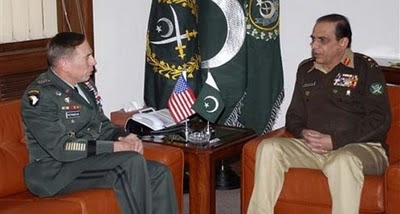 ISLAMABAD: As fury mounted over this week’s aerial incursions into the tribal areas, the commander of US-led forces in Afghanistan regretted on Friday the Nato strike that killed three Pakistani troops the previous day.

The three troops were killed in an early morning raid on Thursday when Nato choppers fired at a Pakistani military post 200 metres inside the border in Kurram Agency.

This was the fourth aerial violation in less than a week, but the first in which soldiers were killed. Reacting to the incident, Pakistan partially shut down a Nato supply route and lodged a protest with the Nato command in Brussels, demanding an apology.

Col Ryder further said the US remained committed to sharing all information related to the incident with Pakistan military as part of efforts to investigate the incident.

The chairman of the US Joint Chiefs of Staff, Admiral Mike Mullen, had also spoken to Gen Kayani after the earlier strikes over the weekend.

Pakistani military commanders confirmed that high-level contacts were taking place to defuse the rising tensions. “Both sides are communicating and conveying their positions,” an official said.

The contacts clearly helped lower the flaring tempers in Pakistan. Sources said Nato supplies would be restored after things cleared up.

Long-term suspension of supplies was not expected either because neither Islamabad nor Washington could afford deterioration in their relations at this particular stage when the western forces’ campaign in Afghanistan was passing through a crucial phase.

About 80 per cent of Nato’s supplies transit through Pakistan, which is the most convenient route for its troops.It is believed that the temporary stoppage was meant to remind Washington how much it depended on Pakistan for sustaining the military operations in Afghanistan.

“There was no closing of Khyber Pass route as such. The movement of the convoys was stopped temporarily in view of growing resentment over the aerial attacks and the resulting threat to their security,” an official said in a clearly rehashed position on holding up of supplies.

An attack on oil tankers carrying Nato fuel in Shikarpur, analysts said, was just an indication of what could happen if Pakistan were to stop providing security to the convoys.

Nato fuel convoys are normally given security cover, but these vehicles appeared to be travelling undefended, probably because of withdrawn security.

In a previous such incident in 2008, US F-15 jet fighters and a B-1 bomber dropped bombs on a Frontier Corps border checkpoint. Eleven soldiers were killed in the incident, which led to an exchange of fire between US and Pakistani forces.

Prime Minister Yousuf Raza Gilani told the National Assembly on Friday his government would consider unspecified “other options” to protect Pakistan’s sovereignty if Nato strikes into its tribal area from Afghanistan did not halt, but rebuffed a shouting ex-general on opposition benches who suggested (we) “beat them back”.  (Read more here.)
Posted by Alice C. Linsley at 2:07 PM