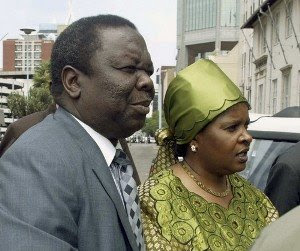 Zimbabwe's new prime minister was slightly injured and his wife killed Friday when their car collided with a truck on one of the nation's notoriously bad roads, officials with his party told reporters outside the Harare hospital where he was being treated.

Morgan Tsvangirai, 56, was sworn in last month as prime minister of a unity government in the troubled southern African nation after years in opposition to the regime of President Robert Mugabe. Tsvangirai and his wife, Susan, were en route to their rural home in the eastern district of Buhera, where a rally was planned for Saturday, when the crash occurred.

Information about how the accident happened and the nature of the prime minister's injuries was sketchy, but a party aide said Tsvangirai's life was not at risk.

Party officials at the hospital in Harare, the capital, confirmed the death of Susan Tsvangirai unofficially but said the family and doctors would release a formal statement later.

Mugabe, who lost his first wife, Sally, to kidney failure in 1992, visited Tsvangirai at the hospital for more than an hour. The president was accompanied by a high-level delegation that included his current wife, Grace, Defense Minister Emmerson Mnangagwa and Reserve Bank Gov. Gideon Gono.

James Maridadi, a spokesman for Tsvangirai's Movement for Democratic Change, or MDC, told journalists at the hospital that the prime minister was in a three-car convoy when a truck narrowly missed the leading car but hit the second, which was carrying Tsvangirai and his wife. The couple's vehicle rolled three times, he said, and Susan Tsvangirai was thrown out of the car.

He would not comment on reports that an aide was also injured in the crash.

The couple had been married 31 years, with six children.

Email ThisBlogThis!Share to TwitterShare to FacebookShare to Pinterest
Labels: Zimbabwe