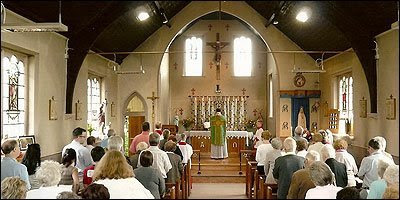 Catholic Diocese of Leeds, UK:
One hundred parishioners of St John the Evangelist, Allerton Bywater, have petitioned their bishop, the Rt Rev Arthur Roche, to allow the parish to celebrate Mass only in Latin, in both the old and new forms. Instead, he is closing the church and has told the parish priest, Fr Mark Lawler, that he will not be appointed to a new parish because his ministry is "divisive".
Fr Lawler said: "This is a parish that does exactly what the Holy Father tells us to do, celebrating the Mass reverently in the old and new forms. The bishop is determined to squash it, and to destroy me because he doesn't want me moving to another parish and doing the same thing."
The parish pastoral council has written to Bishop Roche asking why he has ignored its two formal petitions for the status of a "personal parish" celebrating Mass only in Latin, in accordance with Article 10 of Summorum Pontificum, Pope Benedict's apostolic letter liberating the traditional Latin Mass.
It has now retained the services of a leading canon lawyer to challenge Bishop Roche's decision to close the parish as part of a wider programme of closures.
Relations between Bishop Roche and Fr Lawler have been strained for years. The bishop told Fr Lawler some time ago that he wanted him to say Mass facing the people, and that because he had told him what to do it was therefore the will of the Holy Spirit.
Pope Benedict, in contrast, has written at length defending the ancient practice of celebrating the Eucharist facing east. He has also given priests the legal right to celebrate a public Mass in the traditional rite if they are approached by a stable group of the faithful, however small. At St John's, the vast majority of regular worshippers have asked for the old rite to be made available.
On August 17, their church will be closed by the diocese.
Read it all here.