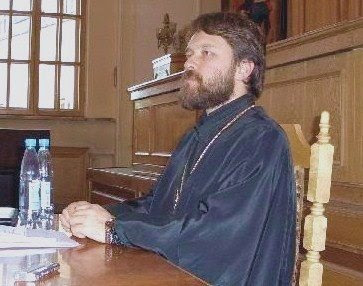 On 22 July 2008, Bishop Vladyki Hilarion Alfeyev of Vienna and Austria, the MP Representative to the European International Institutions, spoke to the Lambeth Conference, a gathering of the bishops of the Anglican Communion, during the session devoted to the theme “Our Common Mission in Europe”. Bishop Hilarion presented a talk on the current life of the Orthodox Church in Russia, its mission to society and its revival since the end of the communist persecutions. “The Russian Orthodox Church, unlike many other European churches, is not losing faithful nor does it have a lack of vocations to the clergy. On the contrary, the number of aspirants to the clergy far exceeds the number of seminary slots available”, Bishop Hilarion noted.

He also spoke on the rebirth of monastic life in the countries of the former Soviet Union, as well as the rebuilding of many churches and the opening of dozens of seminaries. However, Bishop Hilarion laid particular stress on the demographic crisis facing the majority of European countries, including, in particular, Russia. He was emphatic on the dangers of secularisation for contemporary society. “In this situation, those in charge of the various Christian communities must ask themselves the following question. ‘Do we offer an adequate defence of the biblical vision of the family as an indivisible union between a man and a woman?’”

Source: Voices From Russia
Posted by Alice C. Linsley at 10:02 AM